Home / Uncategorized / What would Nono say about that?

My paternal grandfather, Jose Lorenzo Obregon Carrascal, was a penny-pincher. His children would probably lean more toward the phrase “cheap bastard,” the kind of person who might loan you $2 to buy a Coke and then jokingly, but not so jokingly, remind you of it until you paid him back. He died when I was in high school, so I only knew him as a child knows a beloved grandfather. I never got to know him the way I wish I could have. The man had stories, and by the look of the glint in his eye when he told one to me and my cousins, most of the good stuff was R-rated. 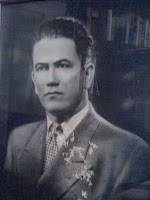 He grew up in the town of Ocaña in Colombia, a child of the Great Depression, which may explain his fierce frugality. Poverty, once left behind, is never really left behind. I remember him how you’d most often find him in his later years: wearing grey slacks, a short-sleeved button down shirt and a trilby hat with a small feather in it (cheap-skate or no, he always looked good) and sitting in an old rocking chair in front of the family hardware store yapping about this or that, offering his frank opinion on any subject to anyone willing to engage him in conversation or argument. It didn’t take much to get him going, a trait lives on in his progeny (step into a room full of Obregons and you’ll hear us talking over each other within the hour, less if there’s alcohol).

There are so many things I wish I could hear his views on now. Some opinions I think I can guess. For example, he’d probably call organic farming a fancy phrase for the way poor people fed themselves back in the day, so why the hell would anyone pay $4 a pound for a tomato. But what about the war in Iraq? Terrorism? The death of Colombian guerrilla leader Tirofijo? What about John McCain and Barack Obama?

He never lived in the U.S., so it’s hard to conceive of what he would think of everything going on here now. I still wish I could ask him, though, if only for the inevitable laughs his rants always provoked, if only to hear him say that the only people he could ever trust were his dogs, if only to know what derogatory term of endearment he would have given my husband.

2 thoughts on “What would Nono say about that?”