Home / Uncategorized / I would do it all over again 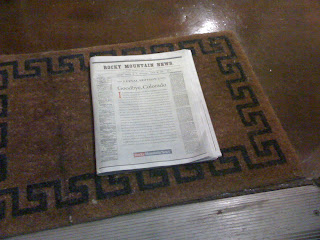 At the end of the movie The Day After Tomorrow — the pseudo-science catastrophe movie in which nature unleashes another ice age onto the planet in the matter of days — there’s a moment in which one of the young survivors contemplates her future. She’s a high school student who, up until the start of the movie, had been living toward the goal of going to a college that was now buried up to its ivy in ice.

“How am I supposed to adjust, Sam? Everything I’ve ever cared about, everything I’ve worked for has all been preparation for a future that no longer exists. I know you always thought I took the competition too seriously. You were right. It was all for nothing.”

I find myself at the moment sympathizing with her. Much of the last 15 years of my life has been spent in or leading to an enterprise that I may no longer be able to participate in. The newspaper I picked up from my doorstep this morning will be the last my employer prints. The last after almost 150 years. The newspaper industry is reeling. I am in the process of applying for a job outside of the industry, and even if I don’t get this job, odds are that the copy I edited last night will be the last I read that ever makes it onto newsprint.

I wouldn’t be human, I suppose, if I didn’t wonder where I would be, who I would be, if I had chosen a path different from newspaper journalism, if I had followed my father’s advice and gone into accounting or engineering or medicine. The thing I keep coming back to, though, is that I wouldn’t be where I am, who I am, without newspapers and no matter how much it hurts right now to see my newspaper close its doors I can say with honesty that given the chance to do things over, I wouldn’t change a single thing.

I would still join my high school newspaper, still spend endless hours working or goofing around in “the pub.”

I would still choose to major in English at Davidson College, where I absorbed all I could from professors who taught me new ways to love this language and love reading.

I would still work for college communications, where I wrote “hometowners” about fellow students, sometimes even getting a byline in the clippings parents would send back to the office and always laughing at the antics of my boss and mentor.

I would still intern at the Palm Beach Post and the Chicago Tribune.

I would still go work for the Rocky Mountain News, where I met and fell in love my with dear hubby.

I would still go back to work for the Chicago Tribune, where I made some of my best and dearest friends in the business and got to see a legendary copy editor hang it up after 40 years in the business, where I got to be a tiny part of the legendary history of a grand newspaper city and drink beer and eat the world’s best burgers after deadline at the Billy Goat Tavern.

And I would still come back to the Rocky, where I got to cover a national nominating convention and the election of the first African-American president and where I got to save a columnist from an error on my very last day and cried tears when it was all over.

3 thoughts on “I would do it all over again”