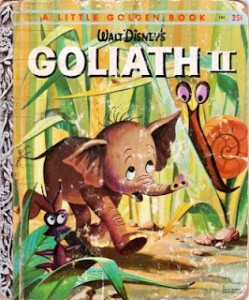 I wish I could remember which was the very first book I read. There are four that remain vivid in my mind from my early childhood, but I can’t say with certainty that any of them were the first. I remember Goliath II, a picture book based on the 1960 Disney cartoon about a tiny mouse-sized elephant; a volume in an encyclopedia my parents used to have that included a bunch of illustrated fables; a collection of stories by Colombian writer Rafael Pombo; and a world atlas. All, I should note, were in Spanish. And all were read many, many, many times over by me or, in the case of Goliath II, by my mom, who would try to skip pages only to be called out by a daughter who had every word of the book memorized.

Reading is such an essential part of my life that one of the aspects of parenthood I was most excited about upon learning that I was going to be a parent was introducing books into my kid’s life. I thought long and hard about what should be the first and about how many of my own favorites I could squeeze in before she is old enough to dictate what should be on the reading list. I’ve wondered too how I would react if my daughter didn’t show as strong an interest in books as I did at a young age. Given that hubby and I are both book nerds this seems unlikely, but you never know. I’d like to think that we will be the kind of parents that give her space to foster her own interests, be they related to words, numbers, art, sports or something else I can’t even think of right now. But as she hasn’t learned the words, “Mother, can you please put down that Austen and start reciting multiplication tables,” let’s get back to the books.

I wanted to set an ambitious tone—if this kid is going to be an English major like her parents, might as well give her a head start on the classics—but I also knew that only I would remember what I read to her in the first year or two, so
I chose books I hadn’t read myself.

First up were The World of Pooh and Peter Pan, both stories that have been retold and adapted a million times over, a testament to their timelessness and imagination. Most interesting to me, reading them as an adult, are their moments of political incorrectness.

In Pooh, Christopher Robin has a “gun” (a cap gun or something equally benign), which isn’t really all that big a deal except that in our current age of helicopter parenting and over-worrying about kids, it’s the kind of detail that might get scrubbed, lest the story be seen as promoting gun play, something that would surely rile at least some parents. In the Neverland of J.M. Barrie’s Peter Pan, there are mermaids and pirates and lost boys and, um, “redskins.” Every iteration of Peter Pan has included the native peoples present in the original story, and none could be accused of offering a sensitive, non-stereotypical portrayal, but neither do any use a slur to refer to them. Barrie was, of course, using the terminology of his time, which was accepted among polite society in spite of its racist connotations. But seeing the word over and over gave me pause. It also made me wonder how I would explain it to my daughter, when she is old enough to repeat words but not so old to understand their subtleties or power. There are thousands of books that well-meaning, if short-sighted parents and school boards have banned over the years for myriad reasons, including offensive language, but I don’t ever intend to censor what my daughter reads, so I’ll need an answer to “Why ‘redskins’?” eventually.

For the time being, we have left Peter and his cohorts behind and moved on to Alice’s Adventures in Wonderland. I’m really enjoying it and wondering why I never read it before. It feels a bit like The Lion, the Witch and the Wardrobe, which I first read in fifth grade and which was among the books that made me a reader for life. I’ll likely read that one to the babe before the year is out. (Aside: That I’ve started with British authors is mostly coincidental—a function, perhaps, of choosing old classics.)

As I read to my daughter, I’ve also wondered which of my favorite books she will like best. But then I have to remind myself that the one she chooses as her favorite may not have been written yet. It’s an odd notion, but exciting all the same, the idea that there will be a book written sometime in the future that may eclipse older treasures in the eyes of newer generations. Such a book will most certainly be written, and it could spark her imagination in a way that will be a bit foreign to me. I look forward to hearing her tell me about it. Assuming, of course, that she likes reading books and isn’t always running off to some corner wondering with delight the mysteries of a periodic table of elements. That would be fine, too.