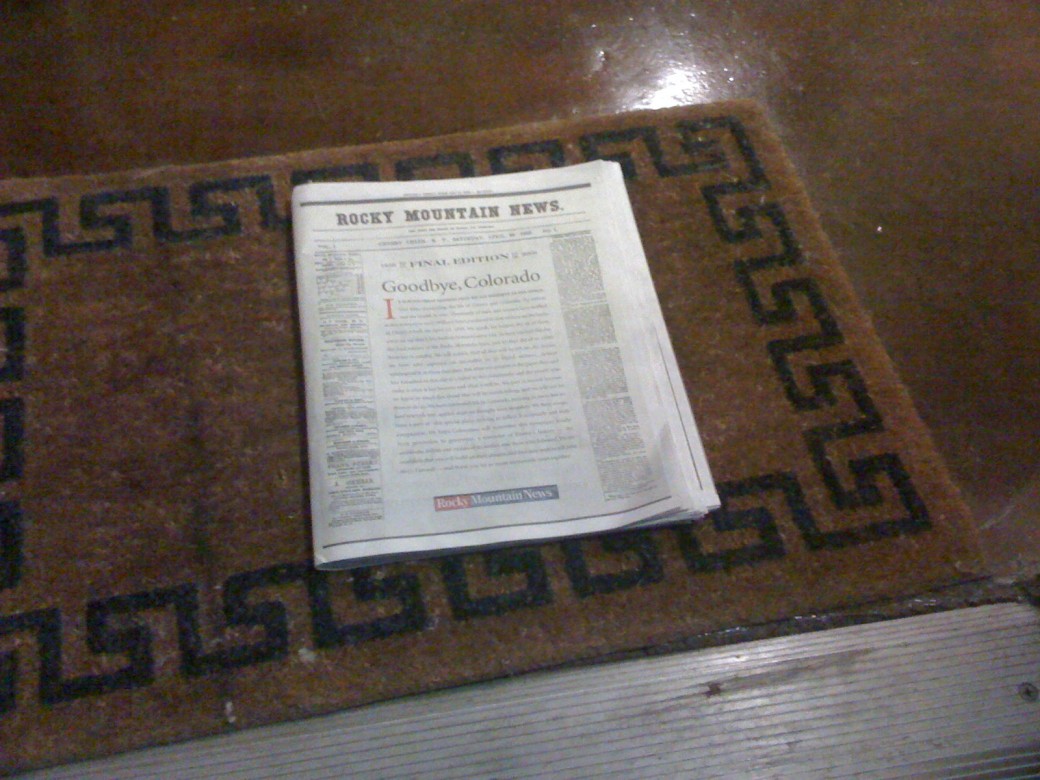 One of my favorite memories of working at the Rocky Mountain News came just weeks into my first tenure there. (I worked at the Rocky between September 2004 and July 2005, and again between August 2008 and February 2009, when it was shut down.)

I was a general assignment reporter tasked with riding on a campaign bus with then Colorado Attorney General Ken Salazar. It was the fall of 2004 and he was running for the U.S. Senate against Pete Coors. The bus took off from somewhere in downtown Denver in the late afternoon and did a small tour of the city that included a stop at his daughter’s volleyball game at North High School and, for reasons that I don’t remember, a stop at a bowling alley. My job was to take notes and pass them on to political reporter Lynn Bartels to add color to a piece she was writing about the Senate race.

Later that night, finally off the bus, I headed back to a mostly empty newsroom to work the rest of my notes into the story.

The reporter who sat in the cubicle across from mine, Jim Tankersley, was still at his desk, and the first thing I said to him as I sat down was, “Ken Salazar is not a very good bowler.”

Jim’s response was immediate and enthusiastic: “There’s your lead!”

The bowling didn’t make it in, but seeing as how Jim is now someone you probably read (or should) with the Washington Post, I would have done well to take his advice.

There are other memories like this one. Listening to semi-drunk college kids in Boulder talk over each other as they explained to me what a keggerator was for a story about binge drinking. Or trying to explain to another student, this one in Colorado Springs, why it was important that I and my colleague David Montero write about his dead friend, who’d fallen out of her dorm room window.

I wasn’t a reporter for long, but it was an especially vivid period of my life that I still think about and won’t forget any time soon. My life as an editor was no less colorful and marked by the kind of chaos that only happens inside of a newsroom thirty minutes before deadline (and at the bar three beers in an hour later). Totaled up, I was a full-time professional journalist for five years.

There is no greater memory of those five years—at the Rocky, at the Chicago Tribune, and then back at the Rocky—than what happened at the end of my shift on the night we put out the Rocky’s last edition.

By a stroke of luck—I’ll leave it to the reader to call it good or bad—I was up when the last piece came up on the editing cue. It was a column by Mike Littwin. In it, he mentioned a famous quote from Thomas Jefferson:

People who talk about the importance of newspapers like to cite Thomas Jefferson, who said that if he had to choose between a government without newspapers and newspapers without a government, he’d choose newspapers. I like this quote better – I don’t know who said it – which Jefferson would surely appreciate: “Everything you read in newspapers is absolutely true, except for that rare story of which you happen to have first-hand knowledge.”

Except when the column came to me, several of the words were transposed, slightly—and unintentionally—altering Jefferson’s meaning and undercutting Mike’s point. It was just a typo, but it was also the reason copy editors exist: to save harried columnists who are writing on deadline (and in this case with emotions running a bit higher than usual).

It was the last piece I ever touched as a journalist. That the editing of it affirmed the importance of my role gets me a little misty-eyed even now. The following morning, I got out of bed, opened the front door, took a picture of the newspaper on my doorstep and spent the rest of the day (and weeks after) wondering what I was going to do. That was five years ago.

What happened was this:

I got a job with a U.S. senator, one who was appointed to replace the one mentioned above when he, a Latino, moved on to the Cabinet of the first African-American president of the United States.

Then I had a kid.

Then, I quit the job with the senator to be a mom for a while and to help my husband run his own start-up company.

Then, I got another job in public service. This time for the local government. I work with smart, funny people whose energy and humor sometimes reminds me of the ones I used to work with when I used to be a journalist.

It doesn’t sound like much for five years, but it’s plenty and it’s good and I’m grateful for all of it. What gives me pause now, and gets me misty-eyed again, is the realization that the time I wasn’t a professional journalist is now going to be longer than the time I was.

When our daughter was born, my husband and I talked about how weird it would be that she would never know us as journalists even though those jobs defined so much of who we were and to a certain extent still are. I’d like to think that she will respect and love  journalists and what they do, either way, because it’s a job that many of our dear friends do and it’s a job that’s still important.

It seems unlikely now, but maybe I’ll be a journalist again someday. You never know. Check in with me in five years. A lot can happen in that amount of time.